Definition:  a person who willfully and purposefully participates in the advance of America’s Customer Service Disaster. 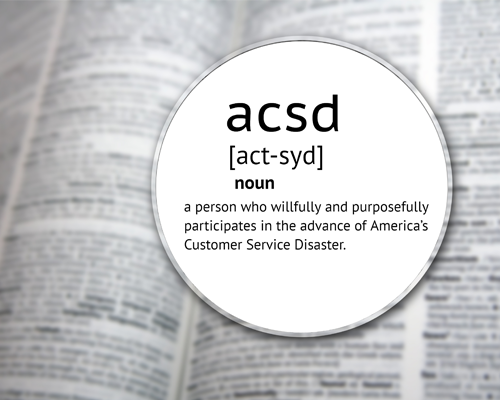 Have you seen any ACSDs lately?

I ran into one today when I was getting coffee this morning.  I was in a hurry so I stopped at a location that was unfamiliar to me but one with multiple locations.  The ACSD at the cash register performed admirably—in the exact manner her/his colleagues would praise.  The ACSD held to the first rule of ACSDIA—that being never to speak to the customer but only to raise the eyebrows enough to elicit the order from the customer.

I gave the ACSD my coffee order which is a little different than most, that being a medium coffee in a large cup with a shot of expresso.  My plan is for the cup to be about 2/3 full so I don’t spill it all over the car while I am driving.

Immediately the ACSD was disgusted with my order since it differed from ordering in his preferred manner, so he turned away in disgust and went over to ACSD2, the one that makes the expresso come out of the nozzle, and let her know I was a problem due to the bothersome, annoying, complicated order.  I didn’t hear him say that to her, but I witnessed the unmistakable body language so common today.

Now I know because I have been through this before at many coffee shops, that I am in deep trouble.  ACSD1 and ACSD2 are not going to take this lying down.  So ACSD2 takes the large cup from ACSD1 and disperses the expresso.  Then she hands the cup to a third participant who has no knowledge of the order.  While this is happening ACSD1 is back at the cash register spreading bad cheer to the next person dumb enough to come in this place.  As planned, the third participant, a sweet young lady not yet skilled in the manner of a senior ACSD, fills the cup up to just a little higher than the brim.  I can’t pour the coffee out because most of the expresso flavor rises to the top, and if I pour some out my whole order is screwed.  So, the ACSDs have put me in a bad spot—somehow, they knew I was in a hurry, so I must get in the car anyway and spill the coffee all over the damn seat.

IF YOU SEE SOMETHING, SAY SOMETHING

If you’ve experienced an ACSD, I encourage you to share your story in the comments section below.