Home > Stories > Competition > Clean up Your Side of the Street First

Clean up Your Side of the Street First

One time I was failing horribly in business, a wholesale meat company. My father, a Lebanese immigrant, started the business. He was a remarkably strong, charismatic, yet incredibly generous man. Not only a powerful businessman but also a sportsman that helped build Louisville into a noted boxing town, sponsored young golfers and other athletes, and was best buddies with the likes of Bear Bryant. After his death the Best Fighter in the Golden Gloves received the ‘Paul Karem Award’—one of the winners was a kid named Cassius Clay. 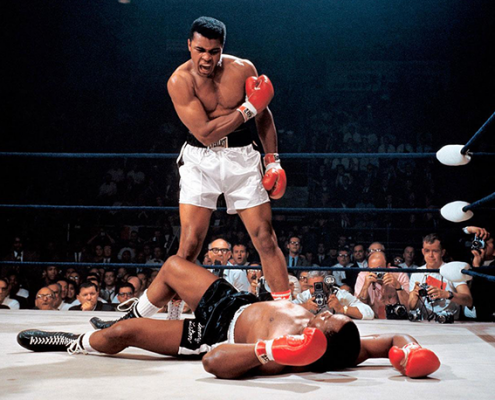 I was two when my dad died so I missed the show. He was either the first, or one of the very first, people in Kentucky to have open heart surgery. It didn’t work.

Twenty-Eight years after his death the business was having a lot of trouble and I left a successful career in mortgage originations to buy the business back. Looking back I guess I was trying to get close to my dad whom I have no memory of whatsoever. Trying to reach this guy that I heard glowing stories of my whole life but never knew.

In my religion there is a practice called a Novena. When performing a Novena you take on a certain directive every week for 9 straight weeks. Since the business was failing at the time, and I was starting to run out of options to save it, I took hold of a Novena—begging for a miracle. Maybe that’s exactly what I got.

I opened the Novena book and read the instructions for the first week, ‘Be kind to those to whom you feel aversion.’ Son of a bitch. No way I was going to do that. I felt aversion towards family, aversion towards my lazy employees, aversion to my suppliers who were treating me unfairly, aversion toward my wholesale customers because they weren’t paying bills fast enough, blah, blah, blah. The whole world was against me and my failing business was all their fault. It was a conspiracy.

So I said “what the hell’ and tried the Novena anyway. I had to do something. Then things started to change. I got off my high horse and took better measure of myself and my behavior. The first week and being warm and fuzzy to people was like a cold bucket of ice water in the face. I started to get it. I had to clean up my side of the street first. I was the problem. The directives for the next 8 weeks were not any easier but more enlightening. But a funny thing happened before the Novena was completed—the bank shut down the business. As I recall that happened in about the 5th or 6th week. But I was a different person as a result of this exercise. I was in the process of cleaning up my side of the street.

Just about simultaneous to the business being shut down I got a call from the Mortgage Company I had worked for 6 years prior. They’d heard I was having trouble and wanted me to get back into the mortgage business which I did. With a whole new attitude, and a clean side of the street—-or at least much cleaner. Even though I had no choice but to declare Chapter 7 Bankruptcy due to the meat business debt, I was now on a path with lots of warm and fuzzies. Within six years of leaving the meat business I paid off the Chapter 7 Bankruptcy—-something that the U.S. Bankruptcy trustee, Joseph Golden, told me almost had never been done. About 400 grand. A great story for my two daughters to hear as they grew up. I have a little trouble believing that any of this would have happened without the Novena.

Or, at least, cleaning up my side of the street