With all the aggravation I have had with air travel I thought I had seen it all.  Boy was I wrong.  I had an experience at the Louisville airport Monday night that rivals everything that’s gone wrong in my history with all airlines and airports, including Delta airlines, and it might, just might, move Frontier Airlines past Delta in the Airline Hall of Shame.  After seeing the Delta departing flights board in the New Orleans airport, depicting flight 1322 to ? (for people that don’t care where they are going) one could not imagine a more careless attitude toward external customers . . . until now. 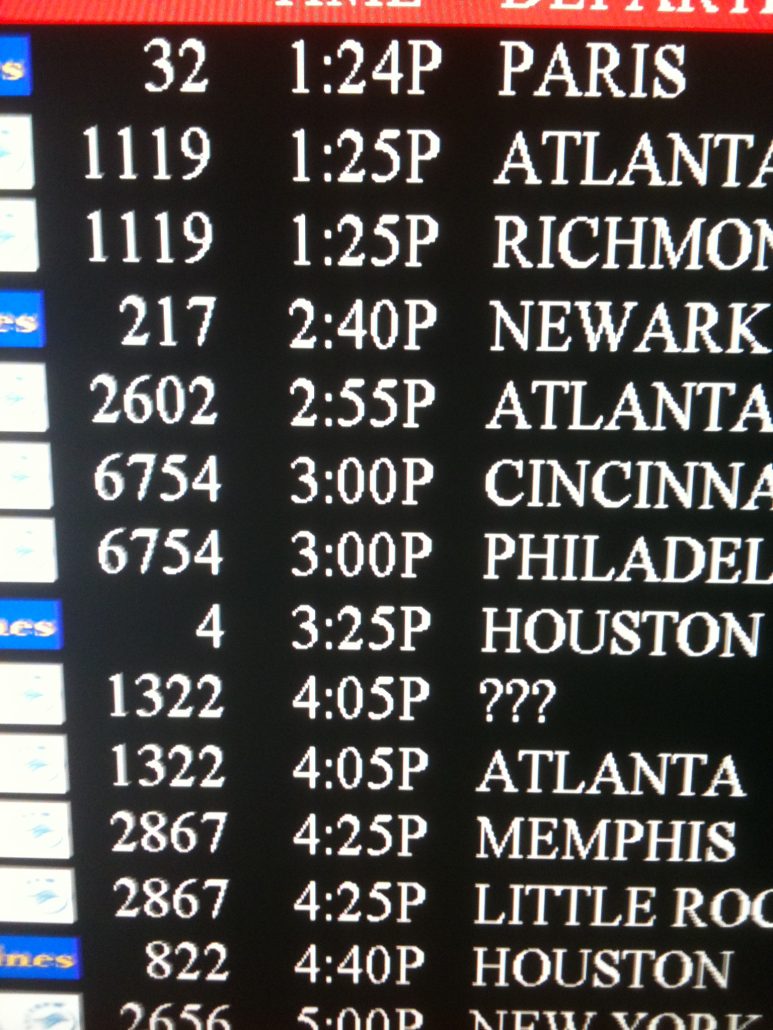 Last Monday night my wife returned from Austin, Texas where she had been helping our oldest daughter and son-in-law move into their new home.  As goofy and nervous as I am while flying,  I am even worse when members of my family are in the air.  So upon entering the Louisville International Airport to pick my wife up, the first thing I did was to hurry over to the ‘arriving’ flights board to see when my wife’s flight was due to land.  A few factors were contributing to my anxiety . . .   the world is nuts, recently Hurricane Florence tore the hell out of everything, and it had been raining cats, dogs and monkeys in Louisville for three straight days.  So I wanted to see the predicted arrival time for the flight from Austin to see that things were good and on time.

So I waddle up to the ‘arriving’ flights boards — which lists the cities from which the flights originate from alphabetically.  The first four ‘arriving’ flights listed are from Atlanta, Atlanta, Atlanta and Baltimore.  No Austin!  Austin comes alphabetically before Baltimore in most airports. So I went down both ‘arriving’ flights boards and still no Austin.  I then go over to the Frontier Airline counter and no one is there BUT the door to the back is open and I sorta yell “can someone help me”?  Lo and behold the snotball of snotballs comes out and she is not happy that I have urged her away from her coffee or coke (both kinds).  I ask the highly perturbed young lady (if I had filmed this with my phone you’d see what I’m talking about) if there is an incoming flight from Austin, she looks at her wristwatch and says, in a most annoyed tone, “it’ll be here at 6:22”.  I begin to say “thanks ma’am, but the ‘arriving’ flights board did not have the Fronti”………that’s all I got out.  That’s all I got out before her coke and coffee missing attitude blurted out “that’s the airport’s fault mister not ours”.

Another charter member of America’s Customer Service Disaster has hit the planet. If she can keep her job, this one might go right to the top.  Or maybe the ‘arriving’ flights board.

The last comment and 1 other comment(s) need to be approved.
0 replies