Home > Stories > ACSD > Consumer Advocates: Are They Helping? Or Hurting?

Consumer Advocates: Are They Helping? Or Hurting?

Consumer advocacy is stronger and more present than ever before. That makes a lot of sense when you consider the current state of horrid customer service and frequent misrepresentation of products and goods.

One of the areas in which consumer advocates have strived to protect consumers is the arena of mortgage lending.

Advocates are hot and heavy in their mission to see to it that consumer borrowers don’t get ‘tricked’ or conned by avaricious lenders. In their February newsletter, the National Association of Consumer Advocates lauded its newly formed (only seven+ years old) Consumer Financial Protection Bureau, claiming that the CFPB had “proved itself integral to curbing predatory lending.”

The CFPB was created by our friends in Congress in 2010 after the big mess of 2008. The Dodd-Frank Wall Street Reform and Consumer Protection Act gave the agency the power to monitor and provide safeguards for consumers against unfair and illegal business practices. I am sure they have done a lot of good in that regard as the current mortgage/real estate market is vibrant and thriving and there doesn’t seem to be much news about raggedy lending practices.

So, the ‘safeguards must be working pretty well. That’s terrific, but…… 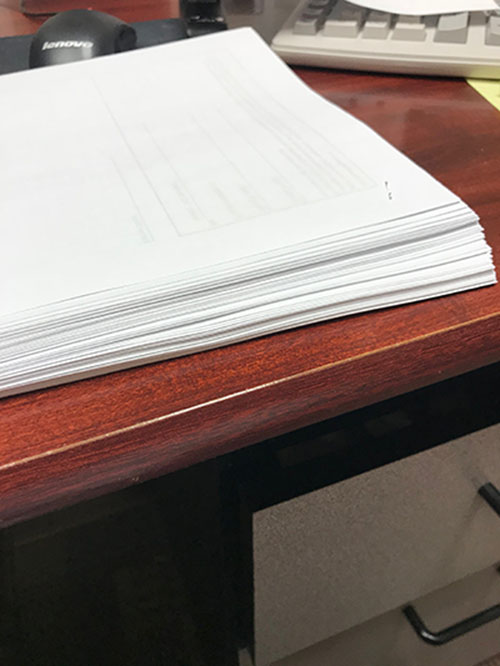 Just take a gander at this stack of papers. Over 100 pages. These are closing forms, ALL of which must be signed by the borrower or borrowers.

The intention of this forest slaughter is to protect consumer borrowers so they don’t get ‘tricked’;  so that predatory mortgage lenders don’t ‘slip something in’ and jam some cost or fee into the deal that the borrowers didn’t know or were not told about. But here’s the rub; no borrowers read this stuff now.

Now that consumer advocates have set out to protect borrowers by requiring every imaginable disclosure, some of which are nearly contradictory, presented for the perusal of the borrowers, the pile is so big that reading the whole stack is unreasonable and ridiculous. So here is the final result—NO ONE reads this stuff. They just sign and leave. What else are they going to do? Read the whole mountain and hold up the next 5 closings for 2 hours? There’s never been a better opportunity for the lender or closing attorney to do something tricky,  BECAUSE THE STACK IS UNREADABLE.   Another example of overzealous bureaucrats locking on the task with no regard for practical application.

And no regard FOR the customer.

Customer Service. Lost in a stack of papers.