Home > Stories > Common Sense > The “Sign” of a Bigger Story

Sometimes, it’s the little things that can tell a big story.

Little things like calling a business and not getting an answer because the phone just rings and rings and rings—when in fact the business is closed for one of those holidays that not all companies universally close for (Presidents Day, Columbus Day, Veterans Day, etc.).

Some companies observe them, some do not.  No biggie either way.  That’s not the point.

The point is, if you were one of the companies that close for these types of holidays, wouldn’t it make sense to tell callers that you are closed for the holiday?  You know, let the customer know what’s going on with your business that day so they don’t keep calling and calling and calling with no response. All the while, these customers are left wondering if you give a damn about them or their business.

As usual, the one that suffers in these instances is the business—and the frustrated customer that doesn’t know what’s going on.

Yesterday, a friend of mine called to tell me another example of a similar scenario while he was visiting his local bank.  A day before the holidays, noticed a sign while he was in the drive-thru window that listed out the banks upcoming holiday schedule.  You would think that after getting 12,347,769 questions about bank hours during the holidays, they would’ve figured out that people are, in fact, interested in when their financial institution will be open for business.  Well, this particular bank solved the problem by launching a notice similar to the one below. 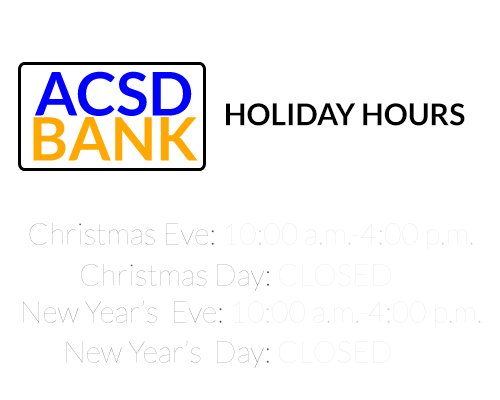 Just like the missing phone recording on Presidents Day, this notice falls short of the mark.

Well, you can’t see the damn thing. What are the drive-up people supposed to do?

Put the car in park and walk up to the bank with a microscope and read it?

I’m assuming that guy put the sign up.  We all know that guy.  You know, the one who gets irritated when you have banking drive-up business and he has to handle it. The bank is smart enough not to place him inside with walk-in customers so they’ve put him at the drive-up window so people can’t strangle him. The guy who doesn’t get it.  The guy who does not know that the bank president signs his paycheck but the customers at the drive-up window participate in making his paycheck good.

I bet you he was told to put a sign out informing drive-up customers of the bank’s holiday hours and schedule.  You see, this was his form of protest for those pesky customers that have more than one transaction and then have the nerve to ask questions.

But not to worry … that guy, who makes his signs so small an American Bald Eagle couldn’t read it, won’t be there long.  The bank moved him to the drive-up window.  The customers are going to move him from the bank.

He just wouldn’t SIGN up for respecting the customer.